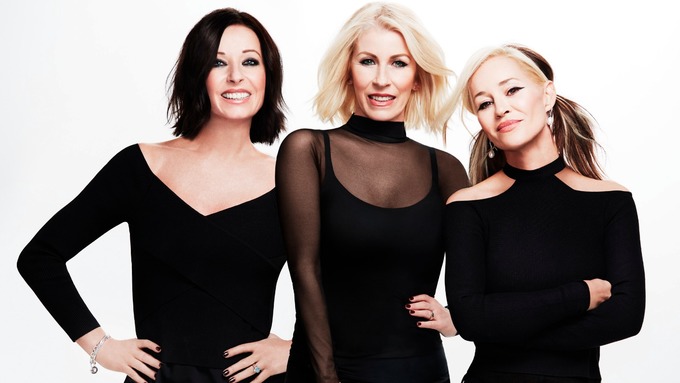 After almost THIRTY YEARS have flown by, Banarama are back – in their original line-up -for 15 tour dates and a brand new single….

It’s a really interesting story considering what the band have been through and I think it’s a brilliant and empowering example of friendship and forgiveness as well as an opportunity to throw some shapes with your besties and relive the past.

During their hey-day the trio, comprised of Keren Woodward, Sara Dallin and Siobhan Fahey, had 10 massive hits including Venus, Robert De Niro’s Waiting, Love In The First Degree, It Ain’t What You Do and Cruel Summer. Not only that but they were also a part of the start-studded, history-making, Band Aid line-up who first recorded the life-long hit Do They Know It’s Christmas. A true success story of their time and in fact the most successful girl group ever! (I entered the school talent show with my 3 girlfriends singing Venus – I can still remember the moves…)

So what went wrong?

Nobody really knows except the girls themselves, but they told Chris Evans today on Radio 2 that stresses and strains inevitably took their toll on the twenty-somethings and arguments abounded causing Siobhan to break away and form the duo Shakespeare’s Sister who had a huge hit with Stay. The group added a new member but things were never the same without Siobhan, which must have been extremely difficult to watch especially given the success she went on to have.

It is interesting to me that Keren and Sara were childhood friends and perhaps that bond was hard for Siobhan to be a third wheel to? She told journalists that it wasn’t an instant decision to return and it took her some time to say yes but that ultimately she felt great joy and a huge relief to be coming back to the group… 29 years is along time to be estranged so I for one think it’s fabulous that they have sorted out their differences.

All that is now old news and the girls are very much together, united and ready to celebrate the fun they once had many, many moons ago.

So, will you be joining them? Here are the planned dates – tickets go on sale on Wednesday at 9am…