LOVE ACTUALLY IS BACK! 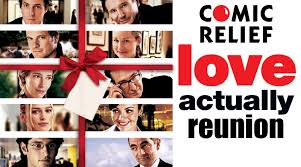 Only briefly, but still. This is pretty exciting stuff if, like me, you watch the movie every single December!

Let me explain… a large chunk of the cast (bar Emma Thompson for obvious and very sad reasons, we will sorely miss the late Alan Rickman for evermore) have come together to make a short movie to raise funds for Comic Relief.

The movie will be 15 minutes long and we are told Hugh Grant WILL be dancing again (I do confess to loving that bit) even after Richard Curtis, the director, revealed how much Hugh despised the making of that scene – that’s the fundraising spirit Hugh!!

Some sneaky images have emerged from behind the scenes giving us a glimpse of the goodies within the short – I really can’t wait!

It has been 14 years (14 years!!!!) since the movie changed Christmas for evermore and some of the younger cast members are almost unrecognisable now…whilst others have barely changed.

Comic Relief, otherwise known as Red Nose Day is on March 24th so don’t forget to be like the cast of love Actually and get involved!

What is your favourite part of the movie or character plot? Here’s hoping it will be included in the short! Mine has to be Hugh and Tiffany although I do have to cover my eyes and ears when she comes down the stairs swearing whilst he waits at the door – cringe alert! My hubby, on the other hand is a sucker for Colin Firth’s character falling in love with his bashful cleaner – he’s an old romantic really!