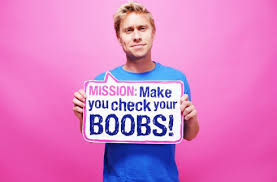 If you have no idea what I am talking about let me explain…you may have noticed lots of women posting a heart on their facebook status recently. The message below is sent to you and the instructions are to add no comment just a heart on your wall and then forward on….

Hi darling can you put a  on your FB wall, without comment, only a heart, then send this message to your chick contacts. This is for women to remember its the week of breast cancer prevention!  Check your boobies!!

Hold your finger down on the message and hit forward.

The idea is to promote Breast Cancer Awareness and whilst joining in can do absolutely no harm at all (and I am all for this kind of thing!), surely it is better to scream from the rooftops why we need to be checking and how?!!

We all know we should be checking our breasts and I am sure we all do it to a degree, but we should be doing it more often and in as many ways as we can. EARLY DETECTION SAVES LIVES. KNOWING YOUR BOOBS CAN SAVE YOUR LIFE TOO.

I ALSO WANT YOU TO READ BELOW AND CLICK THE LINK TO COPPAFEEL.ORG…

This is Kris’s story…

What happens at 23? Well, if you’re lucky, seeing a bit of the world, boozing with mates and a whole load of carefree fun. And if you’re less lucky? Breast cancer. Which is precisely what happened to Kris in 2009.

As nuclear–bomb–sized curveballs go, this was right up there with the best of ’em. Discovering a lumpy boob in June 2008, Kris did the done thing and took it straight to her GP, being sent away on the basis that, at her young age, it was bound to be hormonal. Six months and a lovely stint of travelling later, the ‘hormones’ still remained – so, when Kris’s no–bullshit mum marched her right back to the GP, she demanded a referral. But of course there’d be nothing to worry about, because breast cancer is an older woman’s disease right?

Wrong. Eight months on, following a frustrating fight to discover just what the hell was happening beneath her bumpy bust, Kris discovered not only that she had breast cancer, but that it had spread to her spine. Kris was – is – at stage four, the most advanced type of cancer. There is no stage five.

Straight away, Kris was thrown into a routine of radiotherapy, five months of chemotherapy, and yet more radiotherapy. So long, carefree fun. So long, travelling. So long, boobs. So long, hair. So long, normal twentysomething life.

But as Kris became stable, the curveball remained. How couldn’t it – I mean, come on! She was 23! How the bejeezers could this have happened? Never one to rest on her laurels (read: keep quiet for long), Kris turned her shock and anger into pure kick–ass, immediately making it her full–time mission to encourage her friends, her generation, and YOUNG PEOPLE everywhere to keep hold of their wonderful, carefree lives by getting to know their boobs – and appreciating the fact that, shitty a reality as it may be, breast cancer can affect YOUNG PEOPLE, at any age. A message overlooked by breast cancer organisations.

And so CoppaFeel! was born, the first charity of its kind. And by ’eck, did it land on Planet Earth with a bang. Having been started by Kris and her twin sister Maren just one month after Kris’s diagnosis, within mere weeks Kris was appearing on TV and in national press, raising heaps of cash for CoppaFeel!, and sharing her story in the hope of keeping other lasses and LADS from the same fate.

And if you thought that breast cancer at 23 was surreal enough, try adding the Pride of Britain award and a Downing Street reception into the mix. From being a normal (okay, normal–ish) 23 year old, Kris’s life had suddenly become anything but. And yes, it’s been incredible. But it’s not the life she would have chosen.

After a secondary breast cancer diagnosis, Kris is not cancer free – and perhaps never will be. But she’s keeping as well as she can, being treated at the hospital each month with bone juice to keep her strong. And whenever she’s not in the presence of doctors, she’s pouring her heart, soul and a shitload of kick–ass into making a success of CoppaFeel!, not only refusing to let cancer wreck her party, but refusing to let it ruin yours too.

After all, we girls and boys are lucky enough to have been blessed with lovely hooters. So coppafeel, why don’t you – and let’s keep them that way.

Biography written by the late, and bloody great, Lisa Lynch.